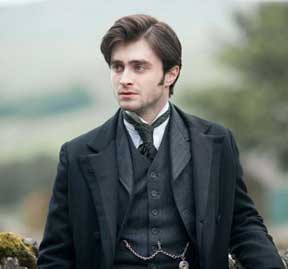 Some of the best horror and sci-fi movies of the 1950s, 60s and 70s came out of a movie studio in England that went under the name of Hammer Films. Started in 1934, Hammer Films went on to bring us the series of Dracula films that starred Christopher Lee and Peter Cushing, and thrillers such as The Vampire Lovers and One Million Years B.C. But by the 1980's Hammer Films had lost its spark, and basically went into hiatus, making a few TV projects and straight-to-video releases. Well, in 2007 they dusted off the moniker and have been quietly making films...until now. There's nothing quiet about The Woman in Black, or its star, Daniel Radcliffe of Harry Potter fame.

The Story (no spoilers): Radcliffe plays a man who is constantly tormented by the loss of his wife (in childbirth), yet hangs on to take care of his son (who seems to be around six). Working for a law firm in London around 1910 or so, he is sent to a secluded village to take care of the estate and mansion of a woman recently deceased. He soon finds that the villagers do not like strangers (of course), warn him against going to the secluded mansion (of course), and blame him for some misfortunes that occur while he is in town (of course). He ignores them all, goes to the mansion, and the ghost story begins. 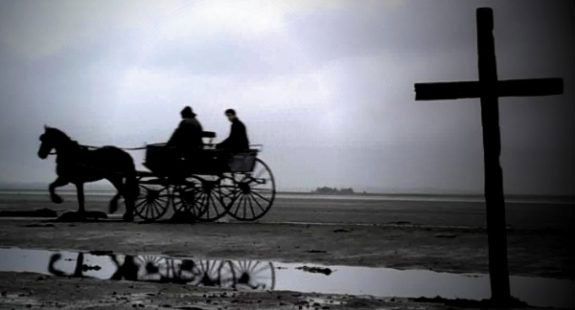 The Atmosphere (tiny little spoilers, nothing to worry about): Honestly, I don't know if the director did this intentionally or if it is just a happy coincidence, but this movie has the look, feel and overall creepiness of the OLD Hammer films of the 1950s and 60s, while being well-filmed with modern techniques. In other words it looks great, has a great retro feel but doesn't look "dated". The lighting effects are perfect in every scene, being just dark enough to be spooky while you can actually see what's going on. The phantoms are realistically scary, the special effects aren't overdone.

Why does it have that old-time Hammer feel? Well, for one thing, the film includes some of the same stylistic elements that the old classics embraced: A very convincing "haunted mansion", set far off from the rest of the world, at the end of a long winding road that cuts through the marsh and gets flooded out at every high tide. There are long shots of the road, both dry and flooded. There village is sublimely gray and gloomy, and every building is made of stone, adding to the Gothic feel. Horse-drawn wagons appear out of the fog. A spooky, dilapidated graveyard sits next to the house. Creepy antique toys and dolls fill the nursery, and seem to "come to life". And there are plenty of shots of lavish 19th century homes, furnishings, trains and people to set the mood.

Daniel Radcliffe: Does a bang-up job in his first starring role outside of the Harry Potter series. There's really not a lot of dialog for most of the movie, and Radcliffe pulls off his emotions with facial expressions and body language that is not overdone. I, like most people, went into this movie fearing he would just act like an older Harry Potter. Not so. The only connection is that his character had the same kind of dread for life, except played to the extreme.

Harry Potter References? (Spoiler Alert!): There were three references that I noticed in the flick that seemed to be inside jokes for Harry Potter fans. Now, I don't know if these were intentional...I may be stretching it...but, A) He falls asleep on a train, in a booth facing the booth across from him. When he awakens there's someone sitting across from him; the shot looks just like one of the Hogwarts Express scenes (I'll let you decide which one). B) When he gets a room in the attic at the Inn, there's a Myna bird in a cage. The cage is nearly identical in style to Harry's owl's cage. And C) when he first goes to the mansion, he is seen coming out of a closet with papers...the closet is built in under the staircase. Now, it seems to me they didn't have to put that scene in...but they did.

Audience Reaction: We went to a 7:45 show on a Saturday Night at The Sawgrass Mall in South Florida. So of course, there were about a million teenage girls that came just to see Harry Potter. Well, they got a hell of a surprise when things started jumping out at them. Screaming, laughing, screaming again, the audience was eating it up. 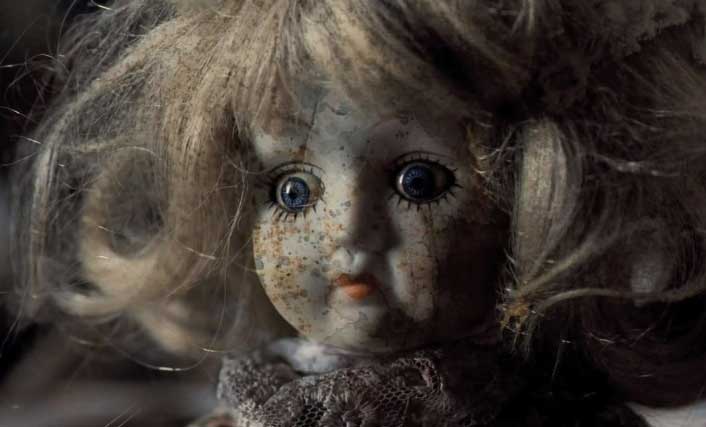 Why you should see it: This movie is pure fun, and isn't above some musical stabs and sudden flashes of scary faces to make you jump out of your seat. It's not a particularly deep story, so if you miss a few lines of dialog because someone was screaming, it won't matter much. The shots of the mansion, causeway, and village are classic horror film Noir and the movie is definitely worth watching on a big screen. For those of you who dig retro-style horror films, you'll really enjoy all the little nuances that make this film as fun as the old Hammer films of the mid-20th century. 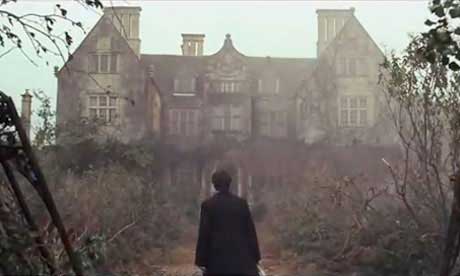 BTW: As of February 5, the film took in $8.3 million and is expected to bring in over $20M for the weekend, surpassing its $17M budget.

One last note: There is almost no blood in this movie. This is a film that relies on screwing with you mind, with your sense of perception, and your ability to try not to jump when a big black crow comes flying out at you. I think a lot of people will say that this movie isn't so great, because of that. But let me assure you, there's a decent body count, the overall mood of the movie is spooky as hell, and it will have you in suspense until the final minute of the flick. Watch the trailer, and you'll see some of the "long shots" that I was talking about, along with some fast clips of the mansion and the people who make this a very spooky, old-fashioned horror movie.

Mod Movie Mondays are BACK at Tiki Lounge Talk!

This week,
The King of Marvin Gardens, 1972 for Mod Movie Monday, Atlantic City Style
starring Jack Nicholson. Filmed in Atlantic City, it's a great time capsule of the world's playground before the introduction of casinos.
Photos, video, stories at Tiki Lounge Talk!