25 years since the Challenger Tragedy 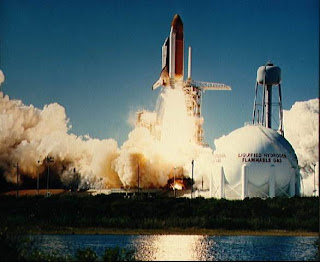 I'll never forget that day. Star Dust was playing on the radio.

I remember it now as if it had just happened. I was a senior in high school...I stayed home from school that day, sick. I was in bed resting with the oldies station on, and Star Dust by Artie Shaw started playing on the radio. Since it was always one of my favorite songs, I sat listening, enjoying. Half-way through they cut the song short for a news announcement. I remember how mad I was that they cut it off before the end, steamed that they'd chop off a great song in the middle for some stupid news story, especially when it was rare for them to play that special tune. Then I heard them say the Space Shuttle Challenger had just exploded in mid-air, seconds after take-off.

My heart sank. Like millions of other kids, I loved the shuttles and the whole glamorous idea of space travel. Yet the shuttle launches had become so common, it seemed, that I didn't even bother to watch the launch on TV, and that made me sadder yet.

After the shock wore off I turned on the tube and found the video of the ship exploding in mid-air, 73 seconds after take-off. My God, all those poor people, including that pretty teacher, gone in an instant; and I somehow knew the hopes and dreams of someday traveling in space myself were gone too. So God damned sad, it still hurts to think about it 25 years later. 25 years, and it still seems like it just happened.

Star Dust was playing on the radio. I'll never forget that day.
Posted by Christopher Pinto at 7:09 PM No comments:

Yeah, I know, long title. Pretty much says it all, though...Modern technology meets old-school noir fiction as my book, Murder Behind the Closet Door: The Wildwood Paranormal Mystery becomes available as "books on demand" through amazon.com, and in eBook format.

The Kindle version can be read on any Kindle device, plus it can be read on an iPad, iPhone (and most other smart phones), PCs, Macs and any other reader that can download the Kindle software (free from Amazon.com).

Kindle and Nook eBooks are only $3.95. Library-quality paperback is $16.95 plus shipping.

I've revised Tiki Lounge Talk's weekly movie posts...welcome to Noir Movie Mondays! I'll still post some fun mod stuff and retro movies, but this season we'll be concentrating on the best of the black and white classics. This week,
Noir Movie Monday: The Man with the Golden Arm, 1955 starring Frank Sinatra
Posted by Christopher Pinto at 9:59 AM No comments: