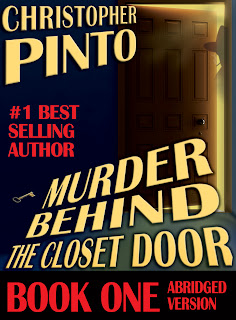 Book one of three of the abridged version of the Amazon Best Selling book "Murder Behind the Closet Door" is being offered FREE for Kindle and Kindle app users, through April 10. Click the link below to download this one-time offer.


Murder Behind the Closet Door, Book One at Amazon.com

Set in the Jersey shore towns or Wildwood, Ocean City and Cape May, Murder Behind the Closet Door is a paranormal murder mystery which combines modern, Stephen King-esque occult with a noir-style detective mystery. This book was on the top 10 on Amazon.com three times in the last two years.

The story centers around a strong female character who finds herself victimized by an unknown force. With the help of friends and her vice squad step father, Detective Bill Riggins (Murder on Tiki Island, Murder Under The Boards) she embarks on a journey of discovery, ultimately endangering the lives of herself and those she loves.

Retailed at $4.99 for book one, and $2.99 for books two and three, Murder Behind the Close Door, Book One Abridged is being offered for FREE through Amazon's promotion until Wednesday, April 10.

Here's what people are saying about Murder Behind the Closet Door:

"Christopher Pinto's bestselling book, "Murder Behind the Closet Door" has been abridged for those who enjoy a faster read without as many "side stories". Over 150 pages of interesting but "not necessary to the plot" stories have been removed to streamline this incredible book to appeal to today's faster readers."
- C.L. Stevens, Cardiff, NJ

“Retro-culture impresario and swingin' scribe Chris Pinto has created a vibrant, entertaining, compelling and imaginative portrait of a very specific time and place - South Jersey in the late 1970s - with a grisly ghost story at its center. The reader delves into a richly depicted world where one keenly tastes, feels, smells and lives the sensations of the Wildwood boardwalk area and its residents throughout a series of mysteriously macabre events. The characters are so well drawn, the dialogue so true, and the incidental and environmental descriptions so vivid that the internal horrors and fantastical elements around which the complex outer narrative swirls seem that much more realistic and credible in context. Pinto achieves a Stephen King-like mixture of mundane, suburban angst spiked and punctuated with sudden, terrifying intrusions from beyond the grave. As someone who grew up in the area, during that era, I could relate to every person and scene in this sprawling epic. The many pop culture references only add to its overall appeal as a literary time capsule. I very much look forward to Chris's next hardboiled but heartfelt endeavor.” "You can taste, feel, smell, hear and see everything in this book and there's a LOT. It's a feast for the senses." - Will “The Thrill’ Viharo, CA

"Murder Behind the Closet Door (full version) is an interesting combination of the paranormal and mystery genres with the added twist that the story takes place over thirty years ago. That last aspect greatly enhanced my enjoyment. So many changes to society and technology have occurred in the past three decades, reading this book was like traveling through a time capsule to a far earlier age. This novel is a throwback in several respects and, in fact, resembles 1970s fiction, thus matching the era of the story. The book is thick, around 600 pages, and doesn't have a lot of white on its pages. The narration isn't quite omniscient, but there is quite a lot of head hopping from one character's point of view to another. I was a bit put off by that initially, mainly because I'm no longer used to reading that style. The dialogue also threw me at first. All of it sounds realistic, but perhaps a bit too much so. Many of today's novels limit dialogue to only that which advances the plot. The characters in this story sometimes talk for the sake of talking, just as we all do. While many readers will enjoy author Chris Pinto's story, what I like most is his literary-quality descriptiveness. I was pulled into each scene, forgetting my own surroundings as I wandered from one of his haunted locales to the next.” - Joseph M. Fraser, Brookfield, WI

“If Stephen King and Mickey Spillane had a son (in a bookish kind of way, that is), Christopher Pinto would be that son. He effortlessly blends the paranormal thriller with the hard-boiled detective in "Murder Behind the Closet Door." Add to that, healthy doses of mystery and romance, and you've got the literary equivalent of a ride through an amusement pier haunted house. And what a fun ride! I loved being scared silly as I stayed up late (much too late) to finish reading another chapter of this book. Let's just say I'll never look at my closet the same way again. ;) Can't wait to see what Mr. Pinto offers up next!” - Miss Cherrybubbles, Meshoppen, PA

Posted by Christopher Pinto at 11:43 AM No comments: